The Hispanic community in the United States has made astounding contributions throughout American history. In celebration of Hispanic Heritage Month, SABEResPODER is recognizing Latino men that faced adversity and prejudice with triumph.

From social activists to businessmen to fashion designers and artists, these respected individuals have paved the way for future generations of Latinos to come. Get inspired with our list of history-making Hispanic men and learn about their fascinating lives, challenges, and accomplishments.

César Chávez (1927-1993) is regarded as one of the most important labor rights activists in the United States. He was born into a Mexican American family of farmworkers in Yuma, Arizona, where he lived until he was 10 years old. Chávez learned about injustice early in his life as his family was scammed and subsequently lost their farm, forcing them to move to California.

In California, Chávez began to become more aware of discrimination experienced by the Mexican-American population. To help his family, he began to work in the fields himself from a young age and 10 years later, began a life-long career in social activism.

In 1962, Chávez, along with Dolores Huerta, founded the National Farm Workers Association, now known today as the United Farm Workers (UFW). Through this organization, Chávez was able to make historic changes for farmworkers and pass labor laws, such as better working conditions, access to health insurance, fair wages, and pension plans. Inspired by the nonviolence tactics of Dr. Martin Luther King Jr. and Mahatma Gandhi, César Chávez practiced peaceful protest tactics, such as labor strikes, boycotts, demonstrations, and hunger strikes. Through these methods, he was able to gain political and media attention and gain support nationwide.

Anthony D. Romero (1965-) is the executive director of the American Civil Liberties Union (ACLU). He was born in the Bronx, New York, to a low-income, Puerto Rican family. Despite economic hardships, Romero managed to study public policy and law at two of the most prestigious universities in the nation: Princeton and Stanford. Upon completion of his studies, Romero began a successful career in public service, advocating for civil liberties and becoming the first Latino and openly gay man to become executive director of the ACLU.

Robert Goizueta (1931-1997) was a groundbreaking Cuban American businessman, who literally worked his way to the top of the Coca-Cola company! In 1954, he entered the Coca-Cola company as a technician at its factory in Havana. Goizueta fled to Miami in 1961 upon the establishment of the Castro regime in Cuba.

Shortly after, he relocated to Atlanta, Georgia with his family and began work at Coca-Cola headquarters. In the 1980s, he was appointed Chief Executive Officer (CEO) and was key in converting the brand into one of the most successful companies in history.

Learn more about Roberto Goizueta in this brief video

Ernesto Galarza (1905-1984) was a Mexican American writer, teacher, and activist that advocated for the Hispanic community in the United States.

As a social activist, Galarza heavily contributed to the unionizing of migrant workers in California. In his career as an educator, he worked at several universities in California and authored many publications, including bilingual children’s books. His accomplishments did not stop there. In 1976, Ernesto Galarza became the first Mexican-American to receive a nomination for the Nobel Prize in Literature.

You can learn more about Ernesto Galarza’s life here

Oscar de la Renta (1932-2014) was one of the most important fashion designers in history and is one innovative Latino that can’t be left out of our list! Born in Santo Domingo, Dominican Republic, De la Renta moved to New York during his childhood. He launched his world-renown fashion brand in 1965. De La Renta reached international fame when he was commissioned to design jewelry for First Lady Jacqueline Kennedy. He later went on to continue custom jewelry design for other prominent First Ladies, such as Nancy Reagan, Hillary Clinton, and Laura Bush.

Oscar de la Renta passed away in 2014 however his brand and legacy continue to thrive to this day. His designs continue to be used and adored by celebrities and well-known personalities. 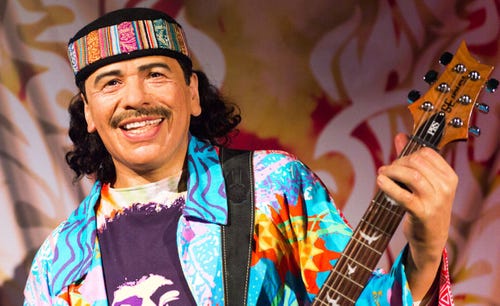 One of the famous international Latino sensations is guitarist Carlos Santana (1947-). He grew up in Tijuana, but in 1961 he moved to San Francisco, California where he began his musical career playing the guitar in a variety of bands. That is, until 1966 when he formed the Santana Blues Band, which later became Santana.

Due to his expert guitar playing and stunning musical collaborations, Carlos Santana became one of the most popular musicians of the 1970s. He then had a resurgence in the late 1990s, thanks to his album “Sobrenatural”, which won 8 Grammy Awards.

The award-winning journalist Jorge Ramos is among the most influential Latinos in the US thanks to his work as a news anchor and author. At 28 years old, Ramos joined Univision and became one of the youngest news anchors on Hispanic television in the US. Since then, his career has flourished while he covered pivotal historical events, including the fall of the Berlin Wall, the disintegration of the former Soviet Union, 9/11 and Hurricane Katrina. Over his very successful career, he won 10 Emmy Awards and published 13 books on matters of national and international importance.

Junot Diaz (1968-) is another famous Latino on our list that has stood out in the field of literature. He was born in Santo Domingo, Dominican Republic but at the age of seven moved with his family to New Jersey. In the 1990s, he began a successful literary career for which he won the Guggenheim Fellowship in 1999, and the Pulitzer Prize in 2008. Diaz is currently working as a creative writing teacher and is an activist against police brutality in the US.

Get to know Junot Diaz’s books

Another famous Latino who achieved great international recognition is Tito Puente (1923-2000), also known as “Rey de los timbales”. He was born in New York in 1923, into a Puerto Rican family that prompted him to take piano and percussion lessons as a child. Later he entered one of the most prestigious music schools in the US, Julliard, and within a few years, began his musical career with his mambo shows.

Puente dabbled in other sounds, like salsa and jazz, and continued making records and playing concerts for the rest of his life. He passed away in June 2000 at the age of 77, but his music and vibrant personality are still remembered by millions of Latinos around the world.

As you can see, the famous Latinos that make up the SABEResPODER list have left a deep mark in American history. All of them are, without a doubt, an example to follow for the new generations of Latinos to come.