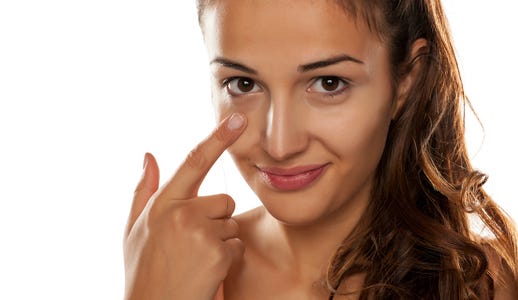 How to Get Rid of Undereye Dark Circles

Dark undereye circles are rarely a cause for concern, but they’re not exactly fun to have, either. They’re most often the result of exhaustion or a lack of sleep, though there are plenty of other factors that contribute to dark undereye circles, like allergies or the natural aging process. But you don’t have to live with them if you don’t want to! Read on to discover what causes these pesky circles, how to prevent them, and how to minimize their appearance.

What Are Dark Undereye Circles?

Officially known as “idiopathic hyperchromia of the orbital region,” undereye circles are dark marks surrounding the eye area, especially under the eyes. There are two main factors that contribute to developing dark undereye circles: melanin production (the pigment that gives skin its color) and the dilation of blood vessels around the eyes, which makes them more visible.

While the way that dark under eye circles form is well-known, the causes leading to this condition vary and can be tough to diagnose. There are different factors that contribute to melanin production and blood vessel dilation. In most cases, a variety of them are at play when a person develops visible dark undereye circles. Below are some of the most common causes.

Whether it's a lack of sleep or interrupted sleep, low-quality sleep prevents your body from resting, which causes blood vessels to dilate. Because skin is thinnest around your eyes, this causes bluish, dark circles to form. Not sleeping long or well enough is typically the most common cause of dark undereye circles.

Maintaining a healthy diet not only helps improve sleep quality, it also prevents skin from thinning and losing elasticity, which makes under eye blood vessels even more visible, leading to dark undereye circles.

It's no secret that alcohol can be harmful to your health, but did you know that it can also affect your skin? Alcohol dehydrates your skin and dilates the blood vessels in your face, increasing the likelihood of getting dark undereye circles. Tobacco isn’t great for your skin, either. It decreases collagen and elastin production, which thins and weakens skin in general and causes the blood vessels under your eyes to be even more visible.

Dark undereye circles can also be genetic. In other words, some people inherit them. It’s especially common for those with darker skin tones to develop undereye circles at some point. This condition is called hereditary periorbital melanosis, and while they’re hard to combat, the causes mentioned above can exacerbate their appearance. Luckily, the remedies listed below can help combat them too.

The Most Effective Treatments for Getting Rid of Undereye Dark Circles 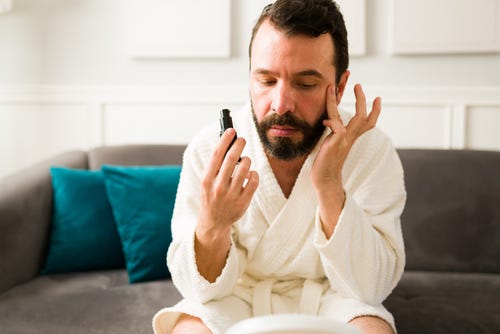 It's common to want to minimize or conceal unwanted undereye circles. Here are a few tricks that you can use to brighten your under eye area.

The most effective way to eliminate dark undereye circles is to stop them before they start. Hereditary dark circles are hard to treat, but even if you have a genetic predisposition to developing them, maintaining a healthy diet, avoiding alcohol and tobacco, and getting enough rest can reduce their appearance.

There's a wide variety of creams on the market that are specifically designed to combat dark undereye circles. Any high-quality product, especially one formulated for the eye area, will improve circulation and effectively decrease the appearance of dark circles. If the cream has vitamin K, its effect will be even more notable.

Home remedies are another way to decrease the appearance of dark undereye circles. Generally these solutions aim to reduce inflammation and increase circulation to the eye area so the blood vessels are less visible. Here are a few ideas:

While the above remedies are great for decreasing the appearance of dark undereye circles, they can be tough to completely eliminate. Don’t worry, there are plenty of types of makeup that can help. These products aren’t just for women, either! More and more men are using cosmetics to improve their appearance and feel more confident. In fact, products designed especially for men are also available.

Which Conditions Can Cause Dark Undereye Circles?

What’s the Difference Between Dark Undereye Circles and Bags?

Both conditions affect the upper and lower eyelids. However, dark undereye circles are characterized by a change in skin color, while bags are just inflammation around the eyes due to fat or fluid that's accumulated under the skin.

We hope this information helps you gain a better understanding of why dark undereye circles occur and how to treat them. Most times they aren’t an indicator of any health problems, but they certainly aren’t aesthetically pleasing. You can minimize their appearance by modifying your habits and using some simple home remedies. If you present other symptoms that indicate a more serious health issue, discuss it with your doctor.

Don’t let the high costs of healthcare prevent you from getting the help you need! With PODERsalud, you’ll enjoy unlimited access to virtual medical consults for just $16.95 a month.