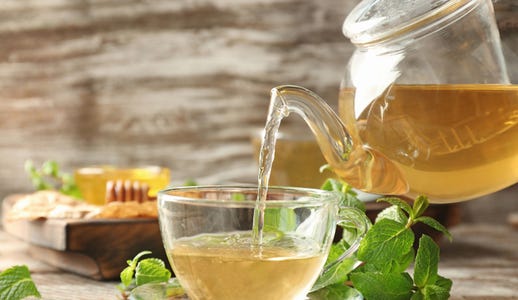 How to Soothe a Cough with Tea

Dealing with a cough can keep you up at night, interfere with your daily routine, and overall be a general nuisance. Fortunately, home remedies can be an excellent way to provide relief. As long as your cough is mild and its underlying cause has been identified by a doctor, drinking tea may help alleviate your symptoms.

Coughing is a normal occurrence in most cases; it can help keep phlegm and other irritants out of your throat and lungs. However, if a cough persists or gets worse over the course of a few days, make sure to see a doctor. Keep reading to find out how to treat a cough at home, including step-by-step instructions, helpful tips, and more!

What Is a Cough and Why Does It Happen?

Before we spill the tea on treating your cough at home, let’s discuss what a cough is. Coughing is a reflex or a defense mechanism to keep the airways clear of foreign particles.

Keep in mind: When an irritant enters your throat or airway, nerves send a signal to your brain. Your brain then sends another signal to your abdominal and chest muscles, triggering a cough and expelling the irritant.

Coughs can be classified in a few different ways: acute or chronic, productive (with phlegm) or non-productive (dry), and voluntary or involuntary. Depending on the type of cough, it may be associated with more or less common causes: 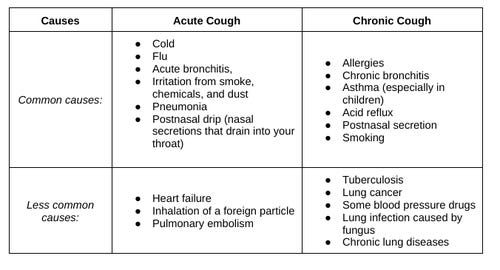 Why Is Coughing Harmful?

Coughing in and of itself isn’t harmful. It’s a defense mechanism that clears your throat of foreign particles. When you have a persistent cough, i.e., one that’s repetitive and doesn’t seem to be relieved by anything, it impacts your rib muscles or cartilage. You may experience pain or discomfort as a result.

Keep in mind: Persistent coughs can interfere with your ability to sleep, eat, and even speak. There are certain warning signs that indicate when it’s time to see a doctor. Pay attention to the following as they might indicate something serious:

Can Tea Soothe a Cough?

Teas dilute secretions, allowing them to be expelled from your lungs or airway more easily. Teas and infusions also contain ingredients that can reduce throat irritability or inflammation, which help relieve coughing.

Keep in mind: For years, medicinal preparations containing all-natural ingredients have been used to treat coughs. The range in efficacy varies, though some of these remedies are backed by scientific evidence.

The 10 Best Teas for Alleviating a Cough

If you’re already receiving medical treatment, it’s important to recognize that none of the teas listed below should replace the medications prescribed by your doctor. Check with your doctor to determine if you can use teas as part of your treatment. Note that some might interact with medications.

Keep in mind: Most ingredients listed here have little scientific backing. Some people may be allergic to some of the ingredients, so read any labels properly beforehand. Proper dosage is critical and should be supervised by a specialist. Finally, these teas aren’t recommended for children under the age of one. 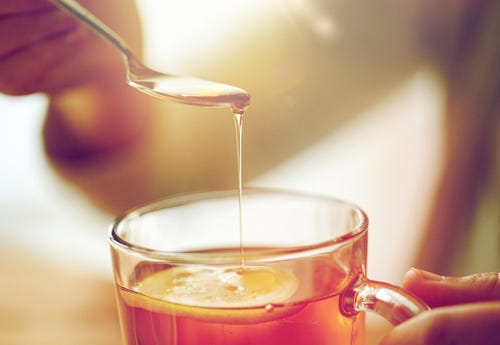 Studies have shown that this natural sweetener has been linked to cough relief, even when compared to the drug dextromethorphan. Although the study was conducted on children between one and five years of age, it’s important to note that infants under 12 months shouldn’t be given honey due to the risk of botulism.

Other benefits of honey

In addition to relieving coughs, honey is used to treat other issues, including: 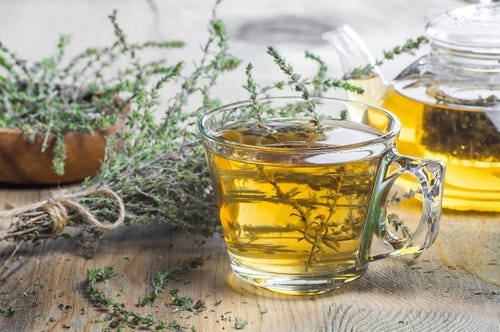 This herb’s antioxidant properties are effective at relieving coughs and reducing inflammation. This is particularly true in cases of acute bronchitis, colds, and whooping cough. Combining thyme with another herbal tea can also help expel phlegm.

Dried thyme can be found in most supermarkets. To prepare the tea, add two tablespoons of thyme to a cup of boiling water. Cover, let the infusion steep, then strain and drink it.

Other benefits of thyme

In addition to being used to treat upper respiratory tract conditions, thyme can also help with: 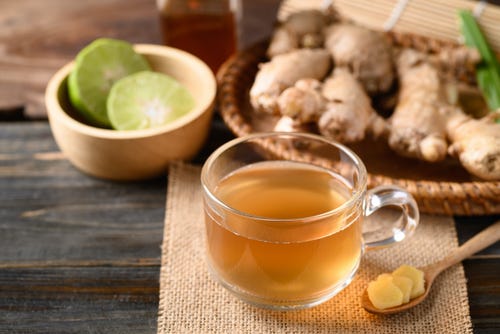 This root is well-known for its benefits in relieving throat irritation. Ginger has been shown to relax respiratory tract muscles and reduce inflammation. This helps relieve asthma symptoms and coughing in general.

Peel and slice about two centimeters of fresh ginger root and add to a cup of boiling water. Let the mixture boil for about ten minutes before drinking. Some stores sell ready-made ginger teas.

Other benefits of ginger

Ginger is widely used in natural and traditional medicine. It’s mainly used to treat nausea, aid digestion, and alleviate cold and flu symptoms. Other benefits include: 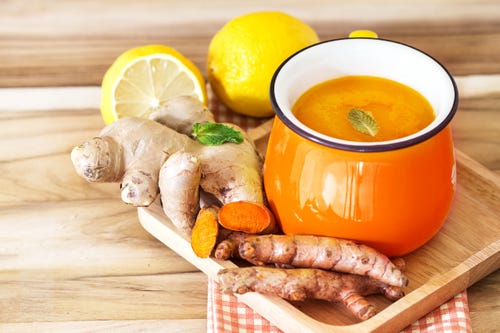 Curcumin is the active compound in this plant that is often dried and ground into a spice powder. It’s well known in the culinary world, as well as in traditional medicine. Its anti-inflammatory properties may aid in the treatment of cough-causing illnesses.

Turmeric is often sold as a powder or tea. Just add one tea bag to a cup of boiling water along with a pinch of black pepper to boost its potency and allow for better absorption. You can even use honey to sweeten it!

Keep in mind: The European Medicines Agency states that turmeric can only be consumed by adults. Its dosage should be regulated according to your specific needs or condition, so always consult with a specialized professional before taking it.

Other benefits of turmeric

Although medicines derived from turmeric are primarily recommended for mild digestive problems, it’s also used to: 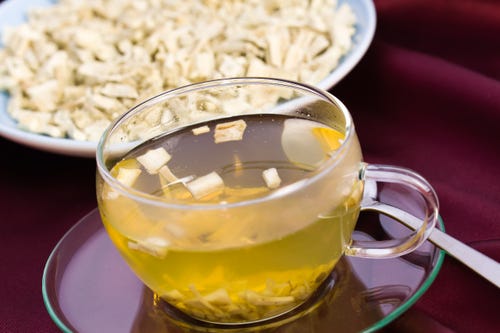 Also known as hemp grass, altea, or bismalva, marshmallow root contains mucilage, which has been shown to help relieve irritation and protect the walls of your throat. This root is most commonly consumed as a tea. Its leaves also play an important role in certain cuisines.

Like ginger, this root should be sliced and added to a cup of water and boiled for about 10 minutes. You can sweeten it with honey if you prefer. Marshmallow root is also sold in capsules or syrup.

Other benefits of marshmallow root

Like all plants, this root has other health benefits: 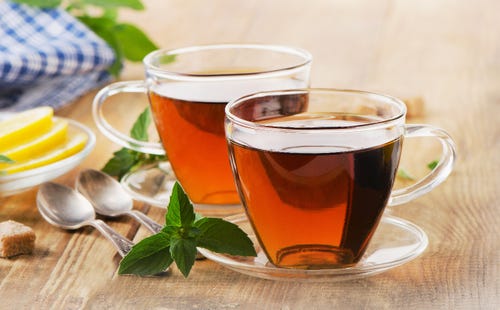 Peppermint is an extremely popular and common natural remedy. It’s served as a tea and can be added to foods and other infusions. In addition to soothing your throat and making it easier to breathe, peppermint has many health benefits. Thanks to its polyphenol content, it can help relieve symptoms of flu, cold, and fungal or bacterial infections.

Simply boil a cup of water and add about two and a half teaspoons of fresh or dried peppermint leaves for one minute before removing from the heat to steep. You can also use mint tea bags or peppermint essential oil for steam aromatherapy.

Other benefits of mint

It may also help with: 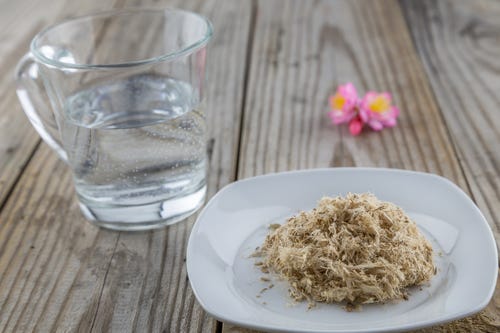 Slippery elm has traditionally been used as a natural sore throat remedy. Its inner bark contains substances that increase mucus secretion, and it can be either chewed or steeped into a tea.

Boil a cup of water, then add the elm powder and steep the mixture while covered for at least five to ten minutes. Strain and sweeten with honey, if desired. Slippery elm pills and capsules are also available.

Other benefits of slippery elm

In addition to treating sore throats, many people use slippery elm for: 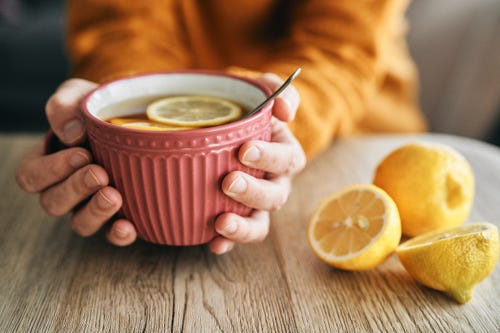 Lemon tea can treat coughing and is delicious when combined with a touch of cinnamon and a little honey. Lemon's high vitamin C content can act as an antiseptic, reducing risk of infection. When combined with the properties of honey and cinnamon, it can be extremely beneficial at treating and relieving a cough.

In a cup of boiled water, add the juice of half a lemon, two tablespoons of honey, and a little cinnamon. Let it cool off a little and enjoy.

Other benefits of lemon 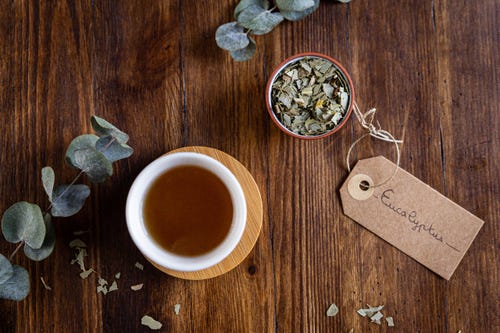 Add one tablespoon of dried eucalyptus leaves into a liter of boiling water and steep until ready to drink. Strain your tea before drinking it, and add a touch of honey if you want some sweetness. Eucalyptus leaves can also be used as a steam treatment to improve breathing and open up the airways.

Other benefits of eucalyptus

Eucalyptus is well-known for its ability to relieve different respiratory conditions. Other benefits include: 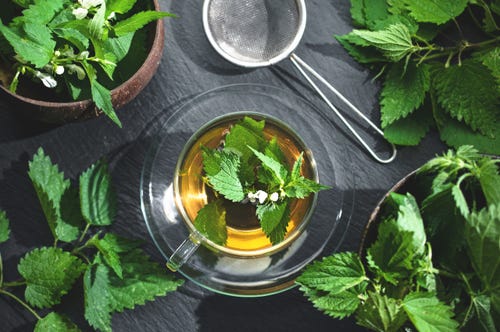 Nettle, also known as urtica, has anti-allergic properties that can help with cough caused by allergies. Some suggest children can consume nettle, but it’s best to consult with a medical professional before administering it to little ones.

It's as simple as steeping one tablespoon of dried nettle leaves in a cup of previously boiled water for at least ten minutes before straining.

Other benefits of nettle

Cough suppressants are commonly used to treat dry cough, and expectorants are used to treat cough with phlegm. Some examples are:

The Mayo Clinic suggests using the following techniques to relieve a cough:

Soothe Your Cough with a Hot Cup of Tea!

While teas aren’t the first thing a doctor will order to treat a cough, they can certainly form part of your treatment plan for relief. With the information in this article, we hope you’re familiar with the most beneficial natural ingredients and how to prepare them at home under the care of your specialist.

Health is wealth, and always remember that SABEResPODER!