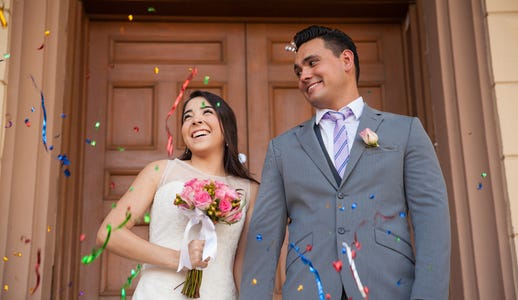 How to Get Married in the United States

Are you planning to tie the knot soon? The process for getting married in the United States can be different than in other countries, but that doesn’t mean you should get cold feet! The SABEResPODER team has created this simple and easy-to-understand guide about the marriage process in the U. S. and everything you should know about planning your upcoming wedding. Continue reading to learn more and get ready for the big day!

Who Can Get Married in the United States?

In the United States, any person of legal age may marry as long as they meet the legal requirements established in the state they wish to marry.

All persons with U.S. citizenship, whether by birth or naturalization, may marry in any U.S. state.

Non-U.S. citizens with a legal status (such as permanent residency, a student visa, or work visa) can get legally married in the U.S.

In most states, individuals without legal status who want to marry either a U.S. citizen or an immigrant with legal status only need to present identification showing that they're over 18 years of age in order to qualify for a marriage license.

Individuals with a tourist visa who wish to get married on U.S. soil may only do so during the duration of their visa.

Keep in mind: We recommend you check the state's laws where you wish to get married before applying for a marriage license.

Types of Marriages in the United States

There are several ways to classify the types of marriages in the United States. The most common is the one that distinguishes between civil and religious unions.

Civil marriage is a legal union of two people (regardless of their gender, sexual orientation, or religious beliefs) that is registered within the states public registry offices. A civil marriage can be performed anywhere, such as an event hall or a garden, just as long as the fees of the legal official are paid so that the wedding is valid.

The most traditional type of marriage is the religious marriage, also known as a church wedding, which is practiced as per the customs of the couple’s religious beliefs. This type of marriage is officiated by a religious leader , such as a priest, pastor, or minister. State laws authorize who can legally perform a marriage in their respective state. 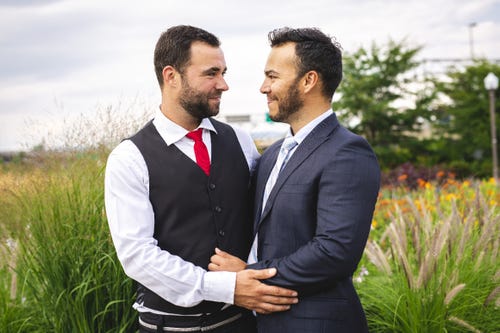 Traditionally, civil marriage in the United States had been recognized only for heterosexual couples even though there was no formal definition of marriage in federal law. In 1996, this changed when the Defense of Marriage Act (DOMA) was passed, defining marriage as the civil union of a man and a woman.

Since then, several LGBTQ rights organizations throughout the U.S. fought for the legal right of same-sex couples to enter into civil marriages. In 2013, the U.S. Supreme Court declared DOMA unconstitutional and made same-sex marriages legal as long as they met the same requirements previously reserved for heterosexual couples.

Requirements for Civil Marriage in the U.S.

When a couple decides to get married, they must comply with all the state's requirements. The most common conditions that must be met before the big day are:

It's important to note that in most states marriage licenses have an expiration date. If for some reason the couple decides to postpone the date of the wedding, their marriage license will lose its validity and the couple will need to apply for a new one.

In the United States, both parties must be of legal age (as per state law). The minimum age to marry is 18 years old in most states, however, for some, it’s 21 years years of age. To prove that both parties are of legal age, they must present any form of legal identification or birth certificate.

Although it may seem a bit obvious, a requirement for marriage is that both partners are unmarried when they apply for their marriage license. Please note that in some cases, additional evidence may be requested to prove your marital status:

Some states require couples to comply with a waiting period before the marriage ceremony. This additional time period is intended to allow the couple to think carefully about whether or not they want to take this big step. In states like Illinois and New York, the waiting period is only one day; in Florida, New Jersey, and Pennsylvania, it is 3 days.

On the day of the wedding, the parties must have witnesses present to sign the marriage certificate in order for it to be valid. While the number of witnesses can vary from state to state, the most common number needed is two.

What Documents Do I Need to Get Legally Married?

As previously mentioned, the most important document a couple needs to get married is the marriage license. In in order to apply for one, they must present the following documents at the public records office (usually the municipal, county or city office):

Can Two Foreigners Marry In the U.S.?

As mentioned above, any couple, regardless of whether they're U.S. citizens or non-citizens without legal status, can get married in the U.S. as long as they meet the following basic requirements:

However, some states may ask for additional requirements. One of the most common is being able to provide a certified translation of the required documents of both parties if they are in a language other than English.

How To Have a Legal Religious Marriage Ceremony in the U.S. 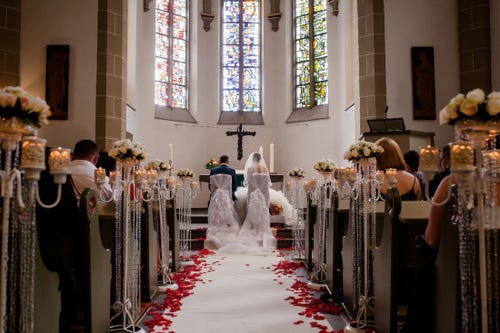 If a couple wishes to legally marry through a religious ceremony, they must comply with the specific requirements of their preferred religion. In the Catholic faith (one of the most widely practiced religions in the Hispanic community), the religious marriage requirements are:

If a couple wishes to marry in the Catholic Church in the United States, they need to present specific documentation about their upcoming marriage and history with the church. The couple must present the following records at least four months in advance of their ceremony (with the exception of the marriage license which will be provided as per state guidelines):

Keep in mind: If one of the marrying parties does not have an official baptismal certificate, whether they belong to another religion or don't profess any,  the Catholic Church will allow the marriage if they request a disparity of worship (also known as the disparity of cult).

Some churches require that the couple attend an approved marriage preparation program. However, this requirement is not mandatory in all churches, so the couple needs to ask if they should attend one before deciding on the church. The duration of this course can vary  from days to weeks and even months depending on the church.

To officiate the wedding, the couple must decide between two wedding options:

The Catholic Church requires that the marrying couple publicly announces their union. Usually, upcoming wedding announcements are published in the church’s bulletin.

The couple’s mutual consent to marry is fulfilled during the ceremony when they exchange their vows. After the couple is blessed by the priest, they consent to the marriage stating the common phrase: "I __ receive you __ as my spouse, and promise to be faithful to you in prosperity and adversity, in sickness and in health, loving and respecting you throughout my life."

The signing of the marriage certificate

Still have questions? We have answers! Here are some of the most frequently asked questions the SABEResPODER team has received about getting married in the United States:

How much does a civil wedding cost in the United States?

As we previously mentioned, the price of a marriage license can range anywhere between $5 to $120 and can differ depending on the state the marriage will take place. The average price for a wedding ceremony and reception is about $25,000 on average. However, the actual cost of your own wedding can vary depending on the type of ceremony you and your partner wish to have and how many guests you will want to invite.

Can I get married if I'm divorced?

Yes, any divorced person can get married in the United States if they present their divorce decree at their local public records office.

Does the marriage license expire?

Wishing You Joy, Love, and Happiness

A toast to the happy couple! While we understand that getting married in the United States may seem confusing, we hope that this guide has served you and your partner in preparing for the big day. From all of us at the SABEResPODER team, we hope that you have an unforgettable wedding and that your marriage is full of joy, love, and happiness!